“I have been with the same man for over 27 years. He has always been supportive of my depressive episodes. I only found out recently, that he was keeping a bunch of stuff inside. He was frustrated with me, and didn’t understand. Even though he reads my blog, I have given him articles to read, and I have described the illness to him until I feel I can’t talk about it anymore. He still doesn’t understand … That doesn’t mean he isn’t loving, supportive, helpful, and patient. He is all of these things and more — he will just never understand that depression doesn’t go away simply by taking a walk, being with other people, healthy eating, exercising, or thinking it away.”

The above reads like words snatched right out of my own mouth (minus the part about being married for 27 years). I don’t know if it’s becoming some sort of an obsession/hobby, but lately I’ve been spending a fair bit of time talking to people who are suffering or have suffered from depression and other mental illnesses (thank you, internet!). You get an instant window into the life of a complete stranger, even if it’s a 55-year-old in a different continent. It’s instant solidarity. When I describe my last tussle with depression as “being trapped in a vortex of mind games, self-loathing, and lies that form your new reality,” they get it.  But the common understanding extends beyond the complexity of one’s suffering; you also understand how depression (or other forms of mental illness) complicates your relationships with the people who love you, in a way no other circumstance does.

It’s been almost 3 months since I’ve been freed from my last (and worst) cycle of depression. During this time I’ve begun to cherish life more than ever before, and to be more convinced of God’s love for me, as an individual, more than ever before — two things that have led me to become passionately pro-life (more on this another time). As I recount my incredible journey, I tend to focus mostly on the ways I’ve been unshackled. As I praise God, I tend to focus mostly on the miraculous way he sustained and delivered me. But I have forgotten the unsung heroes: my family and my closest friends.

You tend not to see them as “heroes” because they didn’t technically do anything to rescue you from depression. But though they couldn’t and didn’t calm the storm, they waited it out with you. And this wait was in no way passive. They continued to be your friend when you couldn’t be a friend, to love you when you loved neither yourself nor them. The storm was you.

It takes a huge toll. Time, emotional energy, spiritual vigor. All your conversations are peppered with “You don’t understand.” They try to understand but they can’t, and they beat themselves up for it. They push and talk you into going for counselling and taking your meds when you’ve given up. They lose much of the time they had to themselves, because to leave you to your self-torment would be cruel. Their schedules and lives in general begin to revolve around you. And not the you who were a ball of sunshine, but an unfeeling black hole that vacuums up all their attempts to cheer you up and restore your hope in life.

And no matter how much they love you, they’re still human beings with physical and emotional limits, so at some point you do become a burden to them. Except they can’t ever admit it or show it in your presence. Over time, in their exhausted state, your negative thoughts and outlook on life become harder and harder to combat, and seep into their consciousness.

And who’s to know how long the storm was going to last? Not even a counsellor or a psychiatrist can. Are we talking a month? A year? Years..? 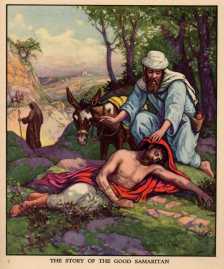 That’s but a glimpse of what my loved ones did and endured for me. I did get better, and am now happy to be back in the game, renewed and with a sharper vision for this lifetime. These people may not have healed me, but if not for their fierce loyalty I might not have hung on long enough to be healed. More than I thank them for their joyful service and companionship, I thank them for continuing to support and serve me when it involved much sacrifice and self denial.

And that makes me praise the God who taught and modelled this very kind of sacrificial love.

“In your relationships with one another, have the same mindset as Christ Jesus, who, being in very nature God, did not consider equality with God something to be used to his own advantage; rather, he made himself nothing by taking the very nature of a servant, being made in human likeness. And being found in appearance as a man, he humbled himself by becoming obedient to death — even death on a cross.” (Philippians 2:5-8)

This post is dedicated to Grace, Dora, Felicia, Joe, Eamon, Pastor Joshua, Papa & Mama, and everyone who supported me through prayer.

View all posts by Karen Z.

What do you think? Leave a Comment! Cancel reply